Using a RMC75E, I am starting a position sequence with the Move Absolute (20) to center stroke (pu 5.0). After waiting for “in Position”, the Track Position (57) is started. An Expression (113) will be calculating a summation of predetermined sine waves which are simulating the surface of the ocean, in a continuous motion, without discontinuities. However, there is a “discontinuity” , only at the moment the Expression (113) starts, after reaching center stroke. This “jerk” needs not to happen.

Yes… there are “limits” that are imposed to the Track Position (57), and the problem might be mitigated by experimenting with those limits (Velocity,Acceleration & jerk)

I’m wondering if this could be approached from a different direction … Is there a way to “Ramp Up” Expression (113)'s complex calculated wave form from zero; perhaps, as is done when ramping up the amplitude, or frequency of a simple sine wave? Regards, Michael

Yes, you can ramp from 5 to where ever your complicated formula says you should be but the track command should limit any jump in position.
If you want to ramp in the user program I use what I call a blended move. You have two targets. The first is the 5.0. The result of your formula. A first order blending would look like this
(1-A)*5+A)*formula_position=ramp_position
A starts at 0 and increments to 1 for a ramp time you specify.
This will probably work but there are higher order “blending” formulas that ramp from 0 to 1.

Yes, you can ramp from 5 to where ever your complicated formula says you should be but the track command should limit any jump in position.

Yes…and No… there is a price for avoiding that discontinuity at the start, after reaching pu 5.0. The resulting curve will be modified continuously thereafter, thus shifting much of the higher frequencies out of the spectrum.

Below is a curve with “jerk limit” at 10,000.
Running the same curve, with a “jerk limit” of 1000, the problem is gone; however the curve has changed. (it has also gotten larger… which is interesting. But, that’s for another time)

Jacob has suggested I plot the Master Signal to evaluate what’s going on … to be continued Regards, Michael 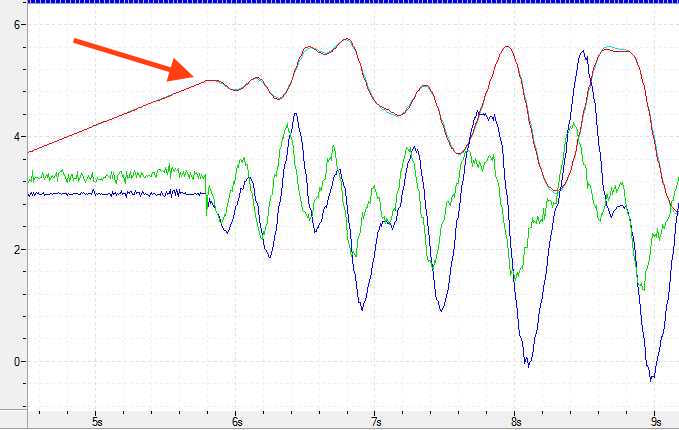 Peter
I think what you are suggesting, is the same as what Jacob has suggested ?..

Now to create the work in RMC Tools… again, this is more fun than anyone should be allowed to have.