What’s the difference between rmc150e v1.0 and rmc150e v1. 0 migration
When i install the gsd of rmc150e, There are two types,See the attachment “TWO TYPES GSD”

In the input and output ,there are four same inputs in each input or output,
How can i select them? What’s the difference between them. See the attachment “input” 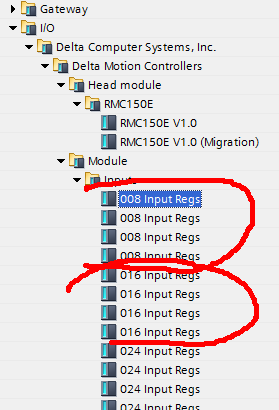 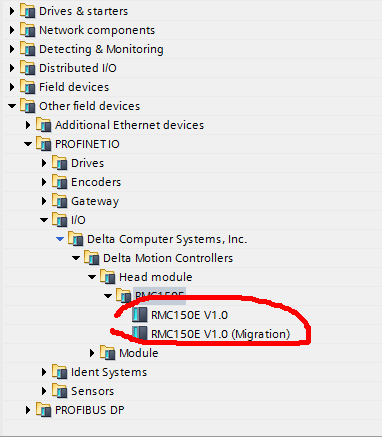 The difference between the RMC150E V1.0 and RMC150E V1.0 Migration is described in the Setting up a PROFINET I/O Connection topic in the RMCTools documentation:

The Migration version is intended only for use with older IO-Controllers that do not support multiple sub modules in the DAP. The non-Migration DAP should be used unless it is not supported by the PROFINET configuration software or IO-Controller.

I am not sure why TIA Portal V13 is displaying multiple copies of each Input and Output module, but I suspect it has to do with TIA Portal grouping the I/O modules of both head modules (V1.0 and V1.0 Migration) together, which the older Siemens software (STEP 7 V5.5) did not. I suggest you review the steps shown in the Using Siemens S7 PLCs via PROFINET topic in RMCTools documentation, which includes adding Input and Output modules to the RMC controller. The steps will not be identical for your particular version of Siemens software, but I expect that it should provide enough direction to get the RMC150E configured.

Thanks for your reply.
Can you explain the “DAP”?
I dont konw the meaning of DAP,Thanks.

It stands for Device Access Point, as mentioned in the help topic, which can be found here: http://deltamotion.com/support/webhelp/rmctools/Communications/Ethernet/Supported_Protocols/PROFINET/PROFINET_Setting_up_I_O_Connection.htm?nav=index&scroll=37466