Again, I have been handed a system with not enough flow. Years past I would have never known. What are my options?

Sorry to post again so fast… At home wound up. Don’t know what to do. Struggle with dead-band, feed forward, anything outside of wizard set-up. What is a little, what is a lot? It kills me that I can not master this. They want it up so fast that I can’t play to learn.

Again, I have been handed a system with not enough flow. Years past I would have never known. What are my options?

Take a deep breath and relax. Then get your pointer finger out and point at the hydraulic designers because they screwed up. There is nothing you can do until the design is fixed. It isn’t like you can fix this in software or with a controller. If the controller outputs 10 volts and the system isn’t going fast enough then it is time to take a break, drink coffee, play from Freecell and let the hydraulic people spend their time figuring out where they went wrong.

The hydraulic designers should know about these equations below. If they don’t then they really shouldn’t be designing hydraulic servo systems.

There is an equations called the Valve Control of Cylinder Motion that estimates the maximum speed of a hydraulic system. Books by Jack Johnson explain this formula and go through the derivation. Better yet a very old book by George Keller that not only provides the formula for the maxim speed but also how long it takes to reach the maximum speed. This may be critical on short point to point moves. Hydraulic Systems Analysis is also cheaper but I see the price went up from $35 to $50.

Personally, I prefer hydraulic simulations but for some reason no one seems to be willing to buy a good simulator but they are willing to waste your time trying to control the uncontrollable or defy the laws of physics.

Stuart, you are not alone. This happens all the time.

Sorry to post again so fast… At home wound up. Don’t know what to do. Struggle with dead-band,

You shouldn’t need to use the dead band eliminator unless there is a dead band in the valve. Servo quality valves don’t have a dead band.
The hydraulic designers can save a little by buying cheap valves with dead band and not realize you will waste much more money in yours and others peoples time getting the cheap valve to work adequately.

feed forward, anything outside of wizard set-up. What is a little, what is a lot? It kills me that I can not master this. They want it up so fast that I can’t play to learn.

That is a problem. It doesn’t sound like the hydraulic designers are making it easy for you. Feed forwards assume the system is roughly linear. It sounds like your system isn’t linear at all. A linear system is easy to tune.
The auto tuning should work but it won’t for systems that have over lapped spools and require a dead band eliminator.
Do you have any plots that show what you are complaining about?

I kind of giggle when you talk about the hydraulic designers. That is my cheap ass boss. Are local Rexroth rep that sells your product, recommended a higher volume dual pump system. My boss opted for a 125 hp unit with 2 pumps in-line because that is what we have the most of. I don’t know the max flow rate.

It isn’t like you can fix this in software or with a controller.

They always think I can fix it with a controller. You should see the things we do with programming because of poor engineering.
The thing is this system has 5 cylinders controlled with the RMC. 4 actuate at the same time, absolut 20. There is also 7 bang bang valves. The flow is enough for any group that has to actuate except the worse scenario. One of the bang valves moves a 12 inch boar cylinder it actuates at the exact same time as the 4 prop. valves actuate. Hence not enough flow.
I can’t stagger the actions because it would kill cycle time.
I am home now, but I will post the plots, I am enjoying that function. I told my buddy I can’t post the plots because it shows bad design.
If you can help me with I can control it will be worth the shame.

The worse case happens every 10 seconds. The goal is met but not optimally. The valve spikes to 10vdc, the target and actual are about almost 2 seconds apart. Perhaps less. The target must be met, and over travel is bad. Both goals are being met. I need to post the trend to see if adding accumulators will work.

This is an example
deltamotion.com/peter/Mathca … tor-NG.pdf
You calculations will take a little more effort because you have more axes to keep track of but you may be able to concentrate the worst case big cylinder controlled by a bang-bang valves.

BTW, it is best if the bang bang valves and the servo valves are not on the same hydraulic circuit. Some of our customers have one motor driving two pumps. One pump supplies oil for the bang bang valves. The other pump has accumulators and maintains an almost constant system/supply pressure.

About the max flow rate.

HP=GPM*PSI/1714
so if you know the system pressure you can estimate the flow from the 125 HP pumps. Actually the flow will be a little less than calculated because the pumps aren’t 100% efficient.

I kind of giggle when you talk about the hydraulic designers.

I am glad I brightened up your day a bit.

You tuning looks good up to the point the output saturates at 3.75 seconds. and after the system comes out of saturation. Good job.
There is nothing you can do during the time the output is saturated. You can’t make the system go any faster. BTW, I have a nick name for the Output Saturated error bit. I call it the “Ah Sh__” bit because fixing these problems cost a lot of money. It is cheaper to do it right the first time. Usually the extra money spent is saved afterwards in better performance. 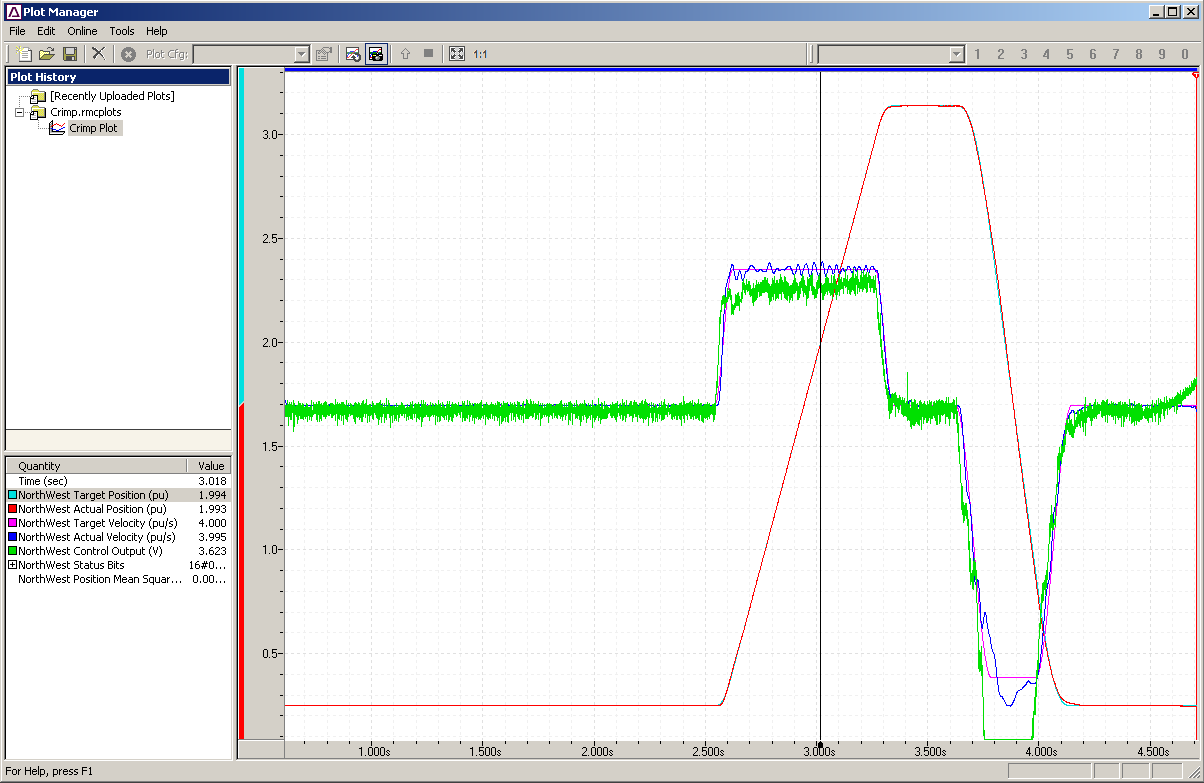 I am afraid that this system will remain like this, or at least until the money flows again. Beings the saturation happens during the retract, and I have a couple of seconds of time here, I have to ignore the error. We plan to do 3 more of these systems… so advice for the future systems would be a help.

Again I have to thank you for the tools. The Rexroth product I have used in the past give me nothing close to this. We are talking about replacing all our VT and DMX stuff with RMC’s.

Stuart, information is the key! Do you or the hydraulic designer have a design guide?
Can you buy one of the books that have the VCCM info?
ExtendSpeed/RetSpeed=sqrt(BlindSideAreaOfThePiston/RodSideAreaOfThePiston)
When there is no load.
Since the blind side of the piston is always bigger than the rod side of the piston the actuator will always extend faster than it retracts. This is almost always the case unless the actuator is pushing a load up as it extends. However in your case you are trying to retract MUCH faster than you extend.

You haven’t shared much about your hydraulic system. Information would help.
Do you have an accumulator? That may help if the pump is the problem.
What size is the valve. The valve is probably too small but more detail are required.

The think you need to understand is that you have done well with the system you were handed. I looked at the following error while moving at constant velocity and they are very small so your tuning job is very good. It seem that you really do have a handle on feed forwards and tuning. You simply haven’t been provided a system that works as intended.
If you learned a little about hydraulic design it would help. Then you would know ahead of time which designs would work and which designs won’t. Usually it is a simple matter of sizing a component or two that makes all the difference so the controls part is easy.

Like you told me, you were forced to be proficient at hydraulics, I guess I will learn them also. I doubt to the extent you have gone, but I will get what you have suggested since most all of our systems use hydraulics. right now I can’t tell you what we have right now, I might loose popularity saying that is not enough, but I have been there before. Showing plots might help me in my quest.

Like you told me, you were forced to be proficient at hydraulics, I guess I will learn them also.

The sad fact is that the control guy usually knows more about the system than all the others.

I doubt to the extent you have gone, but I will get what you have suggested since most all of our systems use hydraulics.

It is just a matter of time and experience. I learn from the school of hard knocks.

right now I can’t tell you what we have right now, I might loose popularity saying that is not enough, but I have been there before.

It is best to ask the right intelligent ( embarrassing ) questions. Don’t complain or say yet.

YES!!! The plots are your friend. Show the designers the plots and ask a question. For starters ask why the actuator moves at 4 inches per second for 3.63 volts when extending or about 1.1 inches per second per volt. Then when retracting why the actuator can’t quite go 8 inches per second even when the control signal is 10 volts. That isn’t even 0.8 inches per second per volt. So ask why the difference between the speeds when extending and retracting? Obviously it is the rod but now ask this. Why does the actuator go slower in the retract direction than the extend direction when it takes less oil to fill up the rod side of the piston than the extend side. Note, the truth is that flow doesn’t make it go, force does ( see Newton’s laws of motion, notice that Newton didn’t mention oil ) but let them figure it out. The reason why the actuator moves faster while extending is that there is more surface on the blank side of the piston than the rod side. The system can apply more force while extending and there is less opposing force on the rod side. Have fun with these questions while you guys are sitting around drinking coffee. It will get the hydraulic designers thinking. That is a start.

I wish. Over his head. Way over. He would discard the conversation based on the fact he did not understand what was said to him (happens a lot). My best hope is to request to design the power unit needed myself. When I tell them stuff they don’t understand, but they figure I know best. Sort of funny, but I got my Controllogix that way.

I have to say, I like my boss, and he thinks the world of me. Sure he should not be designing hydraulic systems. There is no system designer only an accountant.

He would discard the conversation based on the fact he did not understand what was said to him (happens a lot).

Yes, this happens a lot.

My best hope is to request to design the power unit needed myself.

Now you are on the right track. You will get your mechafluidtronics degree yet from the school of hard knocks like me.