Attached are 2 plot files from the same machine. The one plot is using a Balluff Micropulse BTL7-S561B-M0915-Z-S115 which seems to have excessive noise on the actual velocity. The other plot is using a Temposonic RHS0360UD70AS1B1102 which is less noisy on the actual velocity. Both transducers are SSI and synchronous. The Balluff has a resolution of 1um and the Temposonic has a resolution of 5um.

Is it normal to see more noise with a finer resolution transducer? I feel the noise using the Balluff is preventing me from getting the best control possible. What are your thoughts?
RD2_plot_temposonic.rmcplots (2.53 MB)
RD2_plot_balluff.rmcplots (1.28 MB)

With finer resolution, it is common that the noise may appear to be more, although the amplitude of the noise usually isn’t greater. On your plots, the noise amplitude is definitely greater. They are both of the synchronized type, so that would not be the cause. The only thing I can think of is that nowadays, the MTS and Balluff magnets are not as compatible as they used to be. Are you using MTS magnet with MTS, and Balluff magnet with Balluff?

I think it has happened that a sensor was not programmed according to the part number. It almost looks like the Balluff is not synchronized. Normally, it would not have that much noise.

I will second what Jacob said. I believe the Balluff magnets are much weaker magnetically.

One other thing that has happened to us is that one time a tech whent to remove a Balluff BTL transducer from a cylinder and instead of unscrewing the whole thing from the cylinder, he loosened the capscrews that hold the transducer together. When everything got put back together, those screws were still loose and messed up the grounding system of the transducer. We did see weird noise and the position jumping when the housing was loose. After we tightened the screws back up, they went away.

The magnets used on both transducers are Balluff since the cylinders came from the distributor already assembled with the Balluff transducer. This machine has 3 other cylinders with Balluff transducers and they all exhibit the same amount of noise. I just replaced this one transducer with the Temposonic to try and figure out where the noise was coming from. Just wanted to make sure this noise is not normal and that no one else has seen this issue before. I may just go ahead and replace all the Balluffs with Temposonics?

We have several Balluff BTL7’s here, and we do not have any noise problems. Have you asked Balluff about this issue?

On the Balluff BTL7’s you guys are using, what type of connectors do you have? Are they the 8-pin M12? If so what are you doing with the 2 wires (red & brown) that are not used? In the Balluff manual they indicate that they can be connected to “GND” on the controller side but not to the shield. I do not currently have these 2 wires connected to anything.

On my cables, the unused wires are red and white. I just left them unconnected.

I do recall that the earth grounding differs between MTS and Balluff. One has the cable shield connected to the sensor, the other doesn’t. Typically, the shield should be connected to earth ground on one end. As you switch sensors, you should take this into account, and switch the grounding. I wonder if this is causing a problem.

Just spoke with Balluff tech support and they seem to think that we may have the wrong magnets. I told them that we had the cylinders assembled by our distributor and that all 4 cylinders had the same noise but that I would try and visually inspect the magnets to see if they were Balluff or MTS. They also told me that I would see more noise with 1um resolution as opposed to the 5um resolution and they could reprogram the Balluffs to 5um but I would have to send them back to have this done.

I guess my next step is to try and see if we can visually inspect the magnets inside the cylinder. Balluff said their standard magnets are black and have Balluff printed on the face and MTS are generally some other color than black with no writing. I will also contact our distributor to make sure the cylinders were assembled with Balluff magnets.

If you are using a Balluff or almost any other standard colored 8 pin M12 cable, Brown should be the +24V supply and definitely connected.
We normally tie back the unused wires.

I have uploaded the connection diagram we use all the time.

More noise might be a part of it but your plots are night and day. I believe is is more in the lines of wiring or wrong magnet. 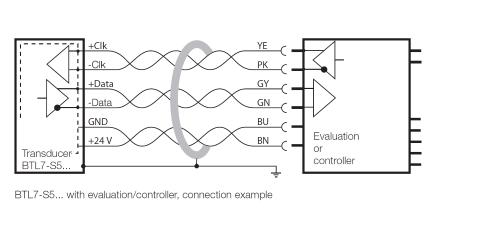 On one of our cylinders, we actually have a Balluff sensor with an MTS sensor, and we don’t see near the amount of noise you are seeing. I do understand that magnets can have problems or get old, though.

To clarify my earlier post, I meant to say red and white are the 2 unused wires on the Balluff.

Just out of curiosity, do you guys have any 1um resolution Balluff’s? Balluff tech support did say there would be a noisier feedback with the finer resolution. We have 2 other lines that use MTS with 5um resolution and no noise on the feedback like these Balluffs show.

I specify 1um Balluff for almost everything. We have not seen the type of noise you see. I would say that 1 micron is pretty fine so if the machine is not stiff and there is some vibration you will definitely pick that up. But, I would expect to see the same kind of noise just less amplitude with the 5um stuff. Unless there is some filter setting in the temposonic unit but I doubt it…

It does look like the color codes between the MTS and Balluff are different even though they use the same colors. Are you re-wiring every time you switch?

Our Balluff transducers are all programmable, and we tend to program them to the finest resolution, which is 1 um or 0.5, I forget which. Yes, we see what appears to be more noise with smaller resolutions, but the amplitude of the noise is not greater, so it doesn’t make any difference. It is not close to what your plots show.

If the noise is caused only by quantization error (which is what would cause the appearance of more noise at finer resolutions), then it should be able to be filtered out quite well by the RMC’s feedback filter. This filter is a 4th-order Butterworth, which has a sharp frequency cut-off but a lot of phase delay. Phase delay is bad for control, but quantization error is relatively high-frequency, so the cut-off frequency can be set quite high, and then the phase delay will be very small at normal machine operation frequencies.

Yes we re-wired when testing the MTS.

Could you do a test at your facility to see what happens if you used a Balluff sensor with a MTS magnet?

I will not be able to do any inspections on our cylinders until this weekend when production is not running.

Could you do a test at your facility to see what happens if you used a Balluff sensor with a MTS magnet?

Not sure if this is directed to Jacob or me but I don’t have the capability to do this. I work for a Delta distributor in Illinois and we also happen to be a Balluff distributor. Either way, we don’t have any Temposonics magnets.

Attached is a plot from our hydraulic system that has a Balluff sensor and an MTS magnet. I think it is set at 1 um. I included a couple plots where the velocity is entirely unfiltered, just for grins. Normally the velocity is always filtered, because it is always noisy due to quantization error.

These plots are with just P, I and feed forwards. The Control Output is nice and smooth, indicating the velocity noise is not excessive.
PlotsHydSystem.rmcplots (468 KB)

Jacob, thanks for doing this test. How much filtering did you apply to the first 2 plots? I may try some filtering as long as there is not any noticeable phase delay.

Are you saying that my noise issue could be caused by quantization error? It just surprised me the velocity feed back noise difference in my plots between the MTS and Balluff transducers.

The first two plots just had the default filtering of Velocity and Acceleration set to Status Only (meaning the control algorithm is not using the filtered values) and the velocity cutoff frequency at 100 and the acceleration cutoff at 25.

What is your filtering set at?

I think your noise is something more than quantization noise.

Did you mean the last 2 plots had filtering set to Status Only? The first 2 plots are the ones that look filtered.

I currently have the filtering set to Status Only with default values but in earlier testing I was able to filter the velocity feedback but had phase lag. I am having to filter the pos/vel output at 15Hz.

They all were Status Only, but for the last two plots, I set the cutoff frequencies to 0, which means the filtering is disabled. Status Only means that what we see is filtered, including the plots, so yes, the first two are filtered.