I have not had a post in a while so I thought I would put a couple things up.

I think of the program triggers as another task that runs all the time. I am not sure of the order that everything is scanned but I think of it as a task. What if at the bottom of the program triggers you had an ( 113) expression statement. You don’t need a default axis or any motion commands just an expression for calculations that need to run all the time. I think this could eliminate the need to continuously run a task in most cases.

I like the slider in the tuning wizard but I think just some simple +/- buttons along with the slider would make final tuning better. It seems that when I am getting close on the tuning I only want to increase a step at a time which can be difficult with the slider. The type of mouse also makes a difference. When I am bringing up the machine I use a trackball and touch screen however a touch pad on a lap top can be just as bad.

I like the new plot options but I am still not fond of the “all in one” window. When I use it on a 15" monitor it drives me nuts however on 19" or larger it’s not too bad. Overall I think the new options are worth the pain of the all in one window. This week I had to work on a machine that was a few years old. The link types were #16 for the in position bits. It took a second for me to remember what I was looking at. You guys have made a lot of improvements over the years. Keep up the good work.

Thanks for the suggestions!

Continuously running task:
We have been wanting this as well. I like your thinking, as the Program Triggers is basically a task. However, there are cases when we want to do calculations even in Program Mode, for which the Program Triggers would not work, so we have assumed we would use some other method when we do get around to doing this. 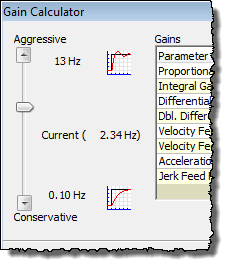 Plot Manger Outside of RMCTools:
Our initial plan was to bring in the Plot Manager to improve the workflow (for example, accessing the rest of the project is much easier now) but still make it possible to move the Plot Manager outside of RMCTools. However, we were too short on resources at the time, and we deemed it better to release as is and try later to implement the ability to pull it out.
There are other options. For example, if the left-hand pane (Project pane and Command Tool) was easily collapsible and expandable, would that solve your 15-in. monitor problems? It seems that would be easier than switching to a completely separate window (for non-experts, switching to a different Windows windows is annoying and even difficult; for you I would expect it’s not an issue).

In addition, we are contemplating switching to a tabbed-style window layout rather than the MDI we are now using. This would make it easier to see which windows are open and to switch to an open window. This would be a major unertaking, but as an added bonus, the package that supports this also provides the ability to pull out any window basically as a freebee. Implementing the pull-out now before doing the tabbed-style interface would basically be wasted effort.