Where:
v_{ ss } is the maximum steady state velocity
K_{ vpl } is the valve flow constant of the powered land or edge computed from the valve specifications.
P_{ s } is the supply pressure
A_{ pe } is the area of the powered or pushing side of the piston.
F_{ l } is the load force. Subtract if opposing motion, add if aiding motion.
{ \rho }_{ v } is the ratio of the flow constant of the power land to the exhausting land. Normally valves are symmetrical so { \rho }_{ v }=1
{ \rho }_{ c } is the ratio of the piston’s pushing area to the side that is exhausting.

Since the maximum steady state speed is reached when the control signal is at 100% the VCCM equation is necessary to calculate the open loop gain of the system which will have units of velocity per % control output. Notice that v_{ ss } is normally be different when extending and retracting so a model and controller should account for different open loop gains for motion in direction

{ K }_{ vpl } is the valve flow constant of the powered land or port. If the piston is extending then the valve port flowing to the cap side of the cylinder is the powered land or port. { K }_{ vpl } is calculated using the specifications from the valve manufacturer. The manufacturers rate servo quality valve at 1000 psi or 70 bar or 7MPa which is actually about 1015 psi pressure drop across the a and b ports. The pressure drop across one port is 35 bar.

In most cases the the flow constant for each edge of the are the same but sometimes there are 2:1 spools as indicated on page 4/12 midway down the page. In this case { K }_{ v } will changed depending whether the piston is extending or retracting and the ratio of the powered land or edge to the exhausting land, { \rho }_{ v } will be 2.

Ok, so I wanted to work out an example to get a better understanding of how this works.

But, I purposly picked a pressure drop at the exact valve rating (100LPM at 35bar per land) so if I do things the dumb old way to figure out the speed of the cylinder I get

This is confusing to me. v_{dumb} is ideal, with no opposing force and no consideration of the cylinder area ratio. I thought v_{dumb} would be higher than v_{ss}. Am I missing something? Should the P_s in the equation actually be system pressure divided by 2 because of the 2 lands in the valve?

Good example and your math is correct.
You don’t think that the valve can flow more than 100LPM.
Hint, what is the steady state pressure of the power end ( cap end ) of the cylinder?

I’m hoping that was a rhetorical question… Of course the valve can flow more than 100LPM. That’s one of the hardest things to explain to people, that the flow ratings for any servo or prop valve are listed at a very specific set of laboratory conditions that will not likely match any applications the valve will ever be used in. So the dumb velocity assumes that the pressure drop across both lands of the valve will be identical. the Vss version accounts for the different pressure drops on the two different sides of the valve and also the fact that there will always be less flow on the rod side of circuit.

The calculated result is almost identical to my simulation result. 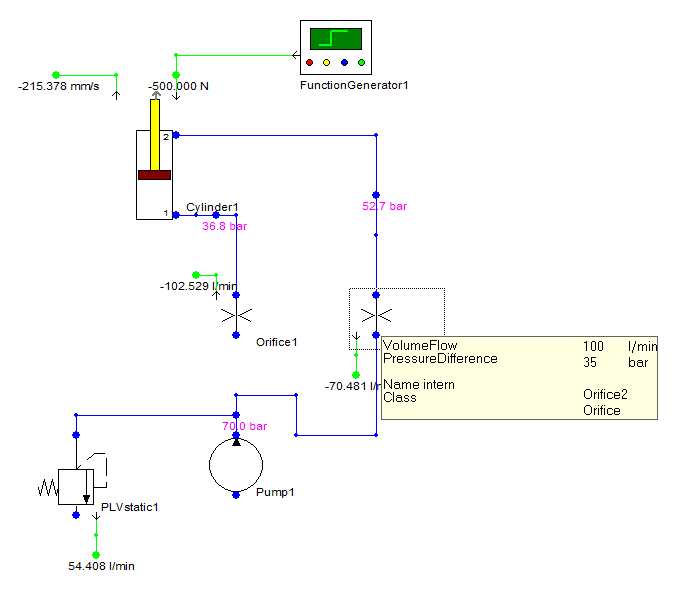 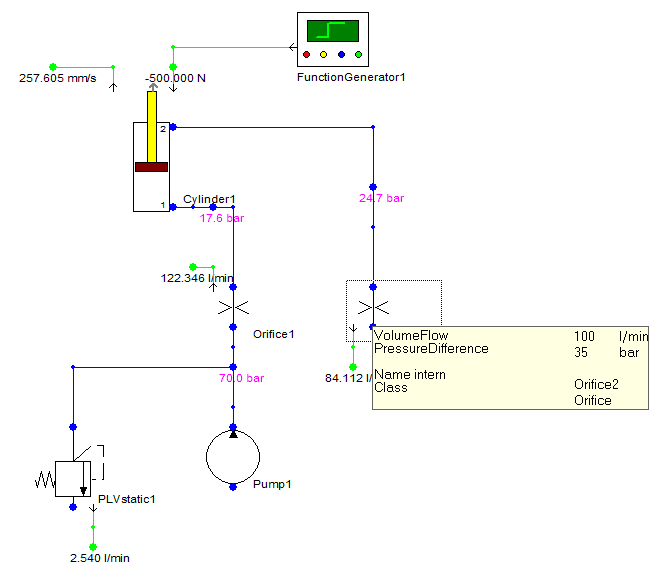 Wenjen, well done! What software did you use to do the simulation?

I use DSHplus, I have used DSHplus to do some simulations, but I am not for sure my simulation result. The VCCM equation is a good example for veryfing my result.